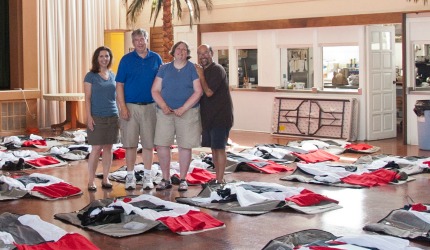 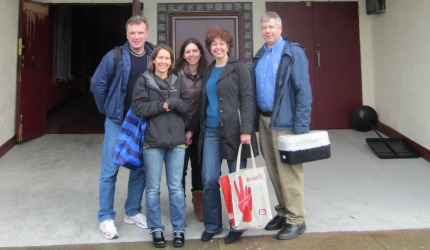 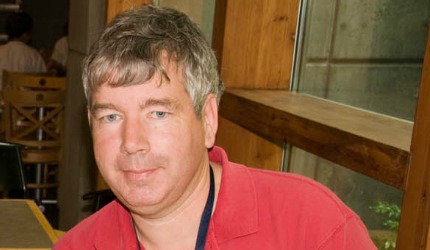 It was with great sadness that we learned of the passing of our dear friend, Dr. Stephen H. Petersdorf.  Steve, as he was known in the Northwest Choirs community, lost his battle with cancer on June 28. Our hearts and prayers are with Steve’s wife Effie, and their three sons, Nick, Andrew and Colin.

Steve began volunteering shortly after Andrew joined the Northwest Boychoir. He did five tours of duty at our annual Summer Camp. Steve employed his fatherly wisdom as a chaperone, as well as his medical expertise – tending to the occasional upset stomach from meals in the dining commons, or the bumps and bruises acquired during our evening games of capture the flag.

Steve was a chaperone for the choir’s 2011 West Coast Tour. Traveling with Steve was an absolute pleasure. He was always upbeat and ready to do whatever was needed to make things go smoothly. His tireless and fun-loving energy made him hugely popular with the boys. Steve was also able to travel with the choir for our 2012 mini-tour to Central Washington. In 2013, when a nasty flu bug hit the Boychoir while touring the southeastern United States, Steve quickly hopped a flight to North Carolina and helped the overwhelmed chaperone crew nurse the boys (and their director) back to health!  That week, Steve was decidedly our hero!

In addition to his work with the boys, Steve joined the Northwest Choirs Board of Directors, eventually becoming our Board President in 2012. His wisdom and insight combined with his passion for our mission made us a stronger organization. He was fiercely supportive of our staff, and ever vigilant for the well being of our members. He had a keen understanding of how incredibly hard our kids worked to make their wonderful music. Whether it was a family concert, a Lessons & Carols performance, or a Vocalpoint show – you could count on Steve being there to cheer our groups on!

Steve was one of a kind. He was warm and generous, and had a humble humanity about him that belied his tremendous professional achievements. As you will read below, Dr. Stephen H. Petersdorf was a brilliant and accomplished physician, held in the highest esteem by his colleagues and patients. It would be easy to be daunted by someone of his stature  – but Steve would have none of that. He was down-to-earth and totally unassuming. He was as happy to talk about the Mariners as he was speaking of loftier, more intellectual things. He was the kind of man who, at the end of a long event, would stick around to help clean up.

Goodbye Steve. We were honored to count you as our friend, and you will forever live in our hearts.

Board, Staff, Choristers, Alumni and Parents of the Northwest Boychoir & Vocalpoint! Seattle

Stephen H. Petersdorf, MD, passed away peacefully at home on June 28, 2014, after a courageous fight against cancer. He was 55.

Dr. Petersdorf was born on October 22, 1958 in Baltimore, MD, to the late Robert G. Petersdorf, MD and Patricia Q. Petersdorf. Raised in Seattle, Dr. Petersdorf was a 1976 graduate of The Lakeside School. He earned his bachelor and medical doctorate degrees Magnum cum laude from Brown University in 1983. He returned to Seattle to complete his internship and residency training in Internal Medicine and fellowship in Hematology-Oncology at the University of Washington School of Medicine. Dr. Petersdorf was Associate Professor of Medicine and Endowed Chair in Cancer Care, University of Washington and Seattle Cancer Care Alliance, where he excelled in the care of cancer patients for over 35 years. In addition to serving as Attending Physician, he was Clinical Director of the High Dose Chemotherapy Unit at the University of Washington Medical Center and Seattle Cancer Care Alliance from 1993 – 2000, and Inpatient Medical Director of the Hematology-Oncology Service from 2001 – 2010. In 2012, Dr. Petersdorf joined Seattle Genetics as Senior Medical Director of Medical Affairs, where he worked towards translating new cancer therapies for patients. Dr. Petersdorf’s passion for patient care extended nationally, where he was a member of several working committees of the National Comprehensive Cancer Network from 2000 – 2012. Respected by colleagues and his patients, Dr. Petersdorf was named Seattle Top Docs by Seattle Magazine from 2002 – 2012.

Dr. Petersdorf married Effie Wang in 1987 and together they raised three sons Nick, Andrew and Colin. He took his role as husband and father as seriously as he did his professional career.  He balanced a two-career marriage with respect, love and humor. A proud baseball-, football- and lacrosse-dad, he was ever-present for his boys both in the classroom and on the sidelines near and far wherever the teams and championships took them. Dr. Petersdorf was a passionate supporter of the Northwest Boychoir and Vocalpoint! Seattle for whom he served as President of the Board of Directors.  A devoted father to two choristers, he was affectionately known as “Chaperone Steve” on performance tours of the east and west coast. The choir’s annual performance of A Festival of Lessons and Carols was one of his favorite celebrations.

Dr. Petersdorf leaves his wife Effie and sons Nick, Andrew and Colin of Seattle, and a brother John E. Petersdorf of California. Dr. Petersdorf requests remembrances be made to The Northwest Choirs.

Donations to the Stephen H. Petersdorf Memorial Fund can be made to:

or online by clicking here.

Please indicate “In Memory of Stephen Petersdorf” in the memo.